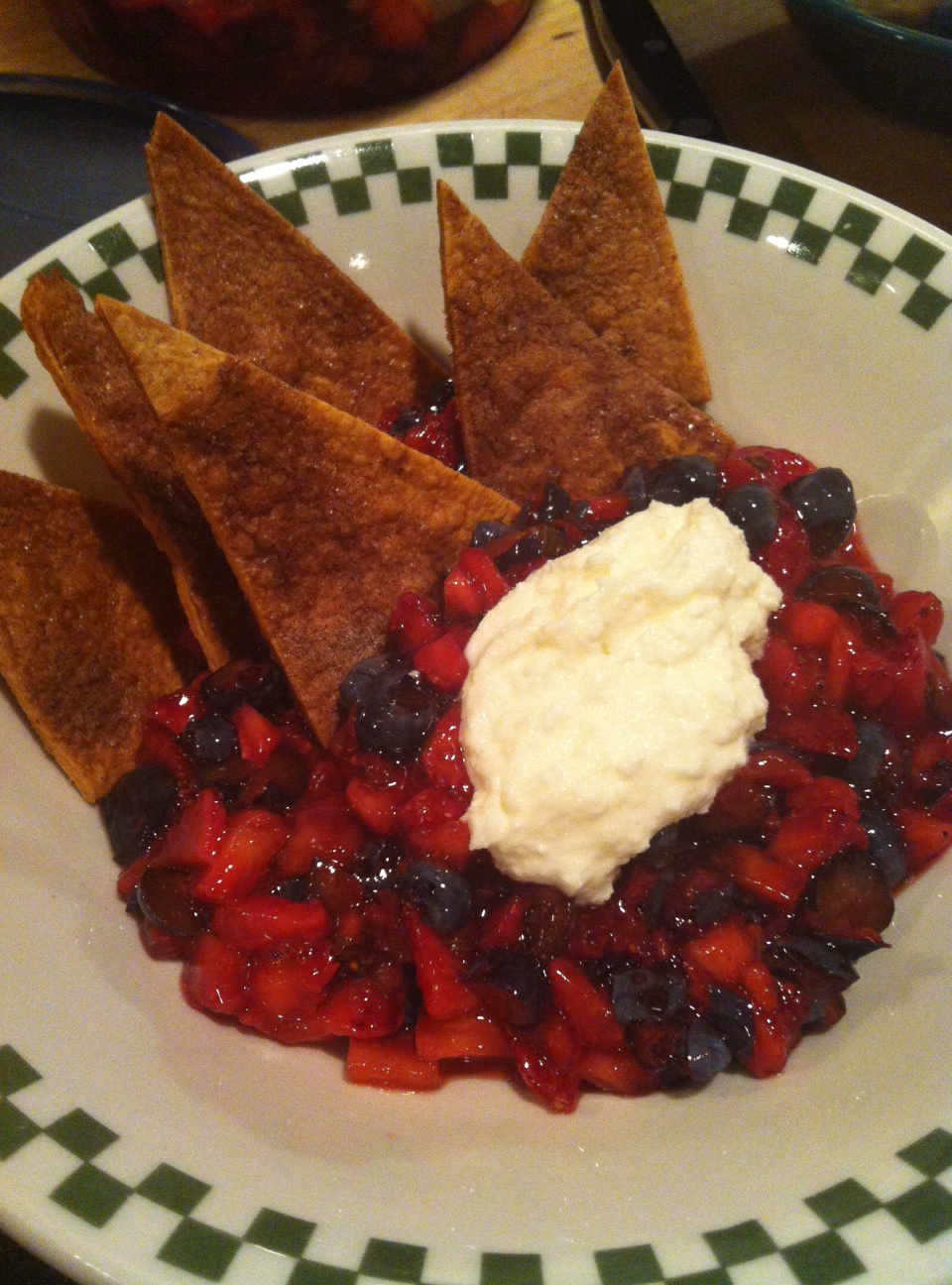 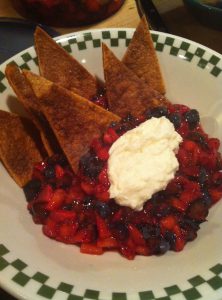 A bonus recipe for Friday! Yay! Here’s the last creation I want to share from Labor Day. This time of year berries are wildly cheap and abundant. If you recall my trip to the farmer’s market, I bought a whole lot of strawberries for $5. The problem is that they don’t keep very long, so I wanted to come up with a recipe that would use a bunch of them all at once. The idea of a salsa came to me. I had some blueberries in the fridge, so I decided to dice two pints of the strawberries very fine along with about the same amount of blueberries. I tossed them with a bit of agave syrup, about two teaspoons of chopped fresh mint (careful, it’s potent stuff), a pinch of salt, and a dash of vanilla. I served it in a bowl topped with some sweetened ricotta cheese (just mix it with some powdered sugar). The combination of fruit and the soft cheese is really incredible. I actually wanted to use marscapone cheese, but Trader Joe’s was apparently out that day. It’s an ingredient that is available at pretty much every market nowadays, but it can be a bit expensive. Trader Joe’s has by far the best prices for all dairy products and since I’m the starving artist and didn’t feel like going on a crusade for some friggin cheese, I decided to go with Trader Joe’s fresh ricotta. It actually worked quite well.

Now this recipe is quite simple as I was sticking to what I had on hand, but you could easily modify this with any fruit, citrus, zest, and even spices you like. But whatever you do, you’re going to need chips. The chips I made for this was phenomenal, in fact I ate many without the dip. Here’s what you do. Preheat your oven to 375 degrees. Melt a half stick of butter in a bowl in the microwave. Cut 6 taco-sized flour tortillas into 8 triangles each (just like a pizza). In a separate bowl combine 2 tablespoons of sugar with 2 teaspoons of cinnamon. Take one of the tortilla slices, brush each side with a bit of butter, then toss into the cinnamon sugar mixture. Place your chips in a single layer on a half-sheet pan that’s been greased with a bit of non-stick spray. You’ll likely need two pans for this many tortillas. Bake in the oven until deeply brown and crispy, about 20 minutes. Allow to cool for a bit before eating to allow them to crisp fully. These chips are delicious with all kinds of dessert applications. We were spreading them with nutella and then topping them with the ricotta and fruit. Ridiculous.

It was nice bonus of dish. Must you enjoyed it. Thanks for share your news.